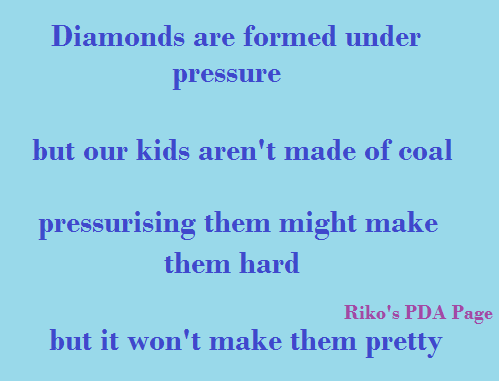 I’ve been reading this brilliant blog https://homecrazzyhome.wordpress.com/ by Tara, a lovely mother to PanKwake. They are Radical Unschoolers and she details her life Radically Unschooling her PDA daughter.

Radical Unschooling follows on from the Unschooling principle, a type of Home Education which doesn’t follow the strict rule and routine of regular schooling. Unschooling is letting your child learn at their own pace, without targets to meet, letting them learn what they want when they want to. This teaches that wanting to learn helps us learn faster and better, and that learning first hand helps retain information better than rote learning.

Radical Unschooling can be synonymous with respectful and autonomous parenting. Radical Unschooling isn’t lax parenting, Radical Unschoolers are with their children every step of their life journey, helping them and teaching them through respecting, understanding, accommodating, accepting and guiding them through everything they need to do. Radical Unschoolers use respectful approaches to teach their kids boundaries and the rules of life, and these kids are more likely to follow the rules they believe in because they respect others, rather than fearing punishment for not following rules they don’t understand or agree with.

For more information on what Radical Unschooling is please follow this link.

So what does this have to do with PDA?

PDA parenting and Radical Unschooling aren’t all that different. Removing demands is a way of also removing the expectations and pressures to conform from the child’s life. Reframing demands can often be done in a way that is more respectful of the child. PDAers often unconsciously demand respect from others, especially adults, Radical Unschooling is about giving children respect and autonomy in their lives.

Many PDAers struggle in the school system, some are removed when the parents can see the child struggling, some are let down by the school system or the teachers themselves, some have schools which do everything within their power to make the child’s education match their needs but it’s just simply too much for the child. Sometimes even with the best accommodations, school is simply too hard. These children often become Home Educated. Parents might immediately Deschool and then Unschool, matching their child’s education to their needs and abilities, some try a Home School structured style but quickly find this simply doesn’t work. Many parents Unschool from the start or chose to Home Educate from the beginning and found Unschooling worked best.

Whatever the reason, many parents of PDAers have found Unschooling to be the best fit for their child. For PDA families, it’s often not a far step from Unschooling and PDA parenting to Radical Unschooling altogether.

Radical Unschooling can be the best fit for many PDA families, parents are less stressed trying to get a non-conformer to conform and PDAers are less stressed by having to follow what they see as arbitrary demands. PDAers already know the rules, they know what expected behaviour is, but they often cannot physically follow those rules. Removing the demand through Radical Unschooling allows the child to choose to follow some rules if they want to, without the added pressure and fear of punishments.