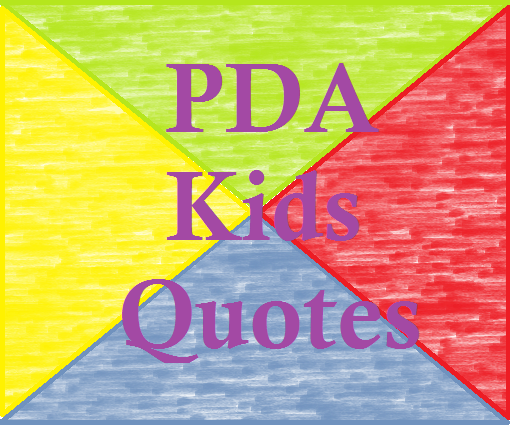 I asked some kids what PDA is like for them. Their responses were brilliant.

Andy said “having PDA is good but it can make me angry” He advises teachers to “listen to the PDA kid” and states that “dogs are good for people with PDA cause they lick you and make you laugh and be happy again”.

One of the children, an 8 year old, pointed out that “fair is not fair to me!”

Zoe, high functioning ASD, says “when I cross or anxious and you try and talk to me even if you are using kind words they sting my brain!”

Dennis, 6, described a doggy in his chest to his ed psych, “it’s a bad doggy and doesn’t listen”, he says it makes him do bad things and he can’t control it.

Mimi, 3, stated to her mother “no my not doing as my told! Your not the boss of me”.

One 14 year old states “don’t even think about saying your the adult and I’m the child cos I think you’ll find we are both human beings with equal rights”.

Another child says his constant asking questions are like an itch in his head and he has to get them out.

A four year old shares that “anger is in charge”, as inspired by Inside Out.

Felicia Goade (a PDA adult) says “dare to be different” and “normal is overrated”.

While pda girl says “what fun is being normal anyways” when asked why she does X from other kids.

“I can’t shower” says a 9 year old. When asked “why not?” she answers “I promised my toes I wouldn’t shower, and you mustn’t break promises!”

A four year old says he “wants to measure people like they measure me”.and he says he “likes having PDA because I don’t have to go to school and be punished. Because I frightened of school and they boss me about, make cross faces, and because I’m too far away from you (mother), and tell me.to play when I don’t want play, when.I move a little bit they put me in corner and then I cry to let you know. Then you don’t come pick me up, then you come get me at night time, and my heart breaks”.